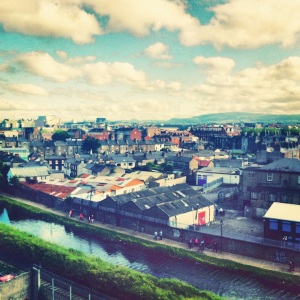 It’s confusing sometimes… before heading to Ireland, I thought that most of Europe/world called soccer – football. And I do find that’s still true. English people call soccer football, even some Irish people do, too.

So in Ireland there’s the GAA or the Gaelic Athletic Association, focused primarily on promoting Gaelic games, which include the traditional Irish sports of hurling, camogie, Gaelic football, handball and rounders.

Now I’ve only ever seen televised really hurling and football – and there’s actually no “professional” teams. The top athletes play for their county, and all of them have day jobs, practice at night and aren’t paid to play. Several do various promotional type spots – but really nothing too major.

I think it’s great that people value tradition here and really encourage participation in the Irish games – each parish (or town/village) has their own GAA club. From my understanding, some parishes are “hurling parishes” or “football parishes” meaning more people play that sport over the other.

While studying abroad – our fantastic program brought us to a very famous hurley maker (the sticks that they use to play hurling with) in Kilkenny.  We saw the full process of how the sticks were made it was incredible to see. The best way I can describe hurling is a way more violent field hockey almost.

Several of the big matches are televised around the country, and up until this past weekend adventure I had only seen small parish games live. We also took my cousin Jenny to a pick-up football game in Phoenix Park when she visited, there were more fights and curses on the field then I’ve ever heard! Incredibly entertaining but I don’t think I’d do well in the game itself.

Just about a fifteen minute walk from my apartment is where Croke Park is located – the biggest stadium for GAA in the country. The stadium is really nicely done and holds over 80,000 fans. Besides holding matches, it’s a venue for events including concerts.

On Sunday afternoon we joined the thousands of people walking to Croker to watch a few football matches. The nice thing is – with the price of a ticket (only €15 for me because I still have my student card) you actually get to see two matches. First up was Meath v. Wexford then Dublin v. Kildare.

A note about scoring, it’s an odd mixture I think of several sports. There’s a goal just like in soccer, but then there’s posts kind of like an American football field goal. So if you make a goal (get the ball in the net) you score points. If you get the ball through the posts, it’s just one point. So scoring is set up like this: 1 (goal) – 4 (points) = 7 points.

We had seats in almost the furthest away you could be (seriously, row X or something) but we were right in the middle and the stadium is well laid out, so wherever you sit is a great seat. The sun was shining, the lads were making it a close game, in the end the score was Meath 0-18 and Wexford 0-13

To further explain, the second match Dublin v. Kildare was almost a slaughter for poor Kildare – they absolutely lost it in the second half. The final score for the match was Dublin 4-16 (total= 28) and Kildare 1-09 (total=12). During the time between the games there was a sudden rain pour (shocking) and I think it was tough for the Kildare lads from then on.

Hopefully this helps to explain a little bit about the match itself – for more information click here to read a bit more. If you ever do see a match, it is quite violent, and when someone gets hurt they pretty much just play around them. I don’t think it looks as tough as rugby (Frank would argue with me there) but you definitely have to be a strong player to excel in the sport.

Here’s a few more photos from our day out:

If you’re visiting Ireland I would definitely recommend heading to Croke Park if you’re in Dublin for a match – there are many personalities there that are entertainment in addition to the interesting sport going on around you.